Chisa Yamaguchi, Diavolo Dance Theater’s Education Director, addressed the audience before curtain-up on Trajectoire, explaining that the work was choreographed in 1999, and Nathan Wang’s original musical score was not heard until opening night. Yamaguchi noted that this work would be more ethereal and visceral than Fearful Symmetries, and also that it is a company favorite to perform.

Trajectoire began tranquilly; the curtains opened to reveal a large boat in a half moon shape, and the silhouettes of two outstretched dancers in the ship’s underbelly. These performers, still unseen and mirroring one another, were then joined by dancers in front of the ship, for brief, athletic solos. And that’s when the spectacle began.

Diavolo’s female dancers effortlessly mounted the ship and formed a line down the center of its wooden deck. Weight distribution on the half-moon became uneven as the dancers treaded their legs to create a steady rocking motion. The women then became an extension of the boat, falling, rolling, flipping and leaning in a constant exploration of their shifting senses of gravity.

Male company members took the spotlight back with solos in front of the boat that highlighted their individual strengths. For example, dancer Ezra Masse-Mahar’s ballet background was evident in his lofty jumps and elongated lines, while dancer Leandro Damasco Jr.’s quick floorwork and fluidity suggested a familiarity with the funk techniques known as Popping and Waving.

From http://www.villagelife.com. No copyright infringement intended.

More awe-inspiring moments followed these solos as the boat’s rocking became more intense. In one moment, dancers hung parallel to the ground, supported by the boat’s railings. Later, female dancers took death-defying swan dives off of the boat’s crests, sailing into the arms of their trusted colleagues. These literal leaps of faith inspired waves of discussion and audible gasps in the audience, and they set the tone for the standing ovation that was soon to follow the show.

In another Russian Roulette-style section of choreography, dancers tempted fate as they played below the rocking ship. An obstructed audience viewpoint in these moments made it appear as if the dancers below the ship might be crushed at any second, and also as if dancers appeared atop the ship out of nowhere.

After a bit more vigorous choreographic play, the dancers in Trajectoire reached the end of their visceral explorations. Onstage energy calmed as a single dancer soloed atop the boat and her comrades disappeared inside it. Trajectoire’s final scene featured this woman, after a jump-heavy, fighting-against-the-odds style solo, sliding down the boat, reaching for a light that illuminated her from above.

It should be noted that this work’s ending was markedly similar to the ending of Fearful Symmetries, so to put the two works on a program next to one another was a questionable choice, in that respect. Overall, though, I was impressed by the physical prowess of the Diavolo Dance Theater company members, and by the way that their work has developed over time. This was my third time seeing the company – I saw Fearful Symmetries in an earlier, shorter iteration at the University of Illinois at Urbana-Champaign’s Krannert Center for the Performing Arts – and I found that Fearful Symmetries had much more substance upon this more recent viewing. Trajectoire was performed just as I remembered it, and it was refreshing to revisit the work. Diavolo Dance Theatre is never dull, that is for certain!

I’ll be posting about these three performances over the next week or so, highlighting one performance or piece at a time. The posts may be a bit out-of-order chronologically, so bear with me! I am starting today with Diavolo Dance Theater’s work Fearful Symmetries, as performed at the company’s February 8th performance. Soon to follow will be a post about Diavolo’s Trajectoire.

In Diavolo Dance Theater’s Fearful Symmetries, ten company members used Tetris piece-like structures to continually reshape their onstage performance space. In doing so, the dancers challenged themselves to redefine the ways in which they interacted with gravity. Dressed in industrial work garb, these performers crawled in, out, around, under and on top of the cubic pieces, always with a strong sense of theatricality.

The music in this work began as industrial sounds; machines scraped and oscillated, periodically emitting a hisses of steam. Horns, woodwinds and percussion instruments were introduced as the dancers’ choreography became more active, and it appeared that each note had a correspondingly punctuated movement*.

*The audience later learned from Diavolo Educational Director Chisa Yamaguchi that Fearful Symmetries was the second part of a three-part installment commissioned by the Los Angeles Philharmonic Association. The music by John Adams, she said, came before the choreography in this work, which was a creative shift for the company. This explains the dancers’ heightened sense of musicality throughout the piece.

A dancer dives off of a dissembled box in Diavolo’s “Fearful Symmetries.” No copyright infringement intended.

As partially illustrated above, dancers performed headstands and balances on top of the blocky shapes, and flipped off of them just seconds later. Fearful Symmetries’ choreography also utilized the shapes’ ability to obstruct audience perspective; dancers created unique images by highlighting only specific limbs while their torsos were concealed behind the blocks.

As the work progressed, animalistic male choreography amped up testosterone levels onstage; at one point men pounded aggressively on fragments of the block (which were, at that time, arranged to look like desks) and executed wave-like arm gestures in a ripple pattern.  After pursuing a single woman with wolf whistles, the men each found their own female counterpart. Makeout moments between couples ensued here, but these romantic connections didn’t feel particularly genuine. It was here that I found myself asking – What is this work really about?

The program notes suggested that in Fearful Symmetries, the cube evoked the beginning of time, and that it held the answers to questions like, “Where do I come from?” and “Where am I going?” While the cube was most certainly an abstract figure in the choreography, I can’t say that my perception of it was quite so lofty.

I preferred to think of the dancers’ interactions with the block as a theatrical comment about problem-solving. At first glance, a problem can seem very large and may be daunting to approach, much like the cube at the start of Fearful Symmetries. But with the help and support of one’s community, that same problem can be reshaped and managed in a multitude of ways – just like the cube.

Fearful Symmetries ended with the image of a woman seated on the shoulders of her cohorts, peering through a telescope at an overhead light. The idea of this dancer, who was quite literally looking forward toward a positive future, satisfied both the artistic director’s interpretation of the work, and my own.

Which interpretation  makes more sense to you? Leave me a comment and let me know!

Cirque du Soleil productions pair incredible physical spectacle with gut-busting comedy and for those reasons, they are not to be missed. Cirque’s “Dralion” came to Raleigh’s PNC arena last Wednesday, and though its choreography was perfectly executed, it wasn’t my favorite Cirque production.

“Dralion” illustrated the quest for harmony between humans and nature, as described in Eastern philosophy. Different colors and acts represented the four natural elements – air, water, fire and earth – and the “Dralion”, a lion-dragon hybrid, represented the blending of Eastern and Western cultures. 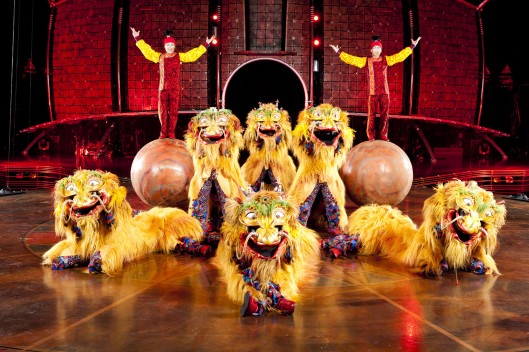 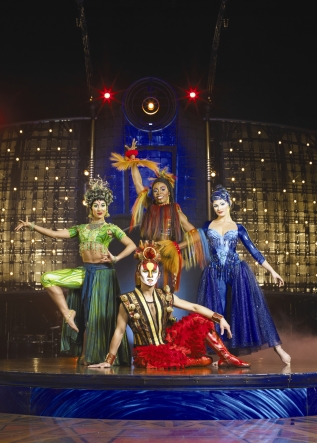 Each natural element had a representative soloist: Oceane, the Water goddess, draped herself in green and performed traditional Indian dance vocabulary; Azala, goddess of the Air, wore blue and ruled the aerial silks; Gaya, goddess of the Earth, dressed in ochre and expressed herself through African dance; and Yao, the Fire god, sported red and gold and wielded a spear. Each spirit governed the performers whose acts fell in his or her kingdom, and together, the “Dralion” company created a balanced ecosystem onstage.

But that doesn’t mean that the show lacked dynamic energy. At choice moments, Chief Elementals rushed the stage, battling for the chance to showcase the performers in their respective domains.

Gaya’s posse excelled in hoop-diving, an act borne of Chinese acrobatic tradition. Clad in ochre bodysuits with stripes and spots, the acrobats were like ninja-cats as they dove, rolled and flipped through hoops with grace. Precise partnering showcased both the performers’ physical prowess and their ability to work as a team.

Though Yao’s weapon of choice was the spear, his acrobatic corps preferred the bamboo poles. These poles, adorned with red decorative fabric, devoured vertical space like the flames of a fire. Acrobats kept the poles in flight by balancing the pole bases on their biceps, chins and palms; the men also launched the poles into the air and dove or flipped beneath them, always returning to upright positions in time to make the catch.

Azala’s aerial pas de deux with a male partner was a bit less flashy. This particular act was more intimate than the rest of the show; Azala chose moments to close in on her partner but their relationship never felt permanent. That didn’t make the act any less beautiful, though; standout moments in this act were a midflight near-kiss and the image of Azala, suspended upside-down in a perfect center split, carrying her partner’s entire weight with one arm.

Oceane performed traditional Indian dance vocabulary while flanked by a crew of trampoline artists. Four trampolinists performed gravity-defying feats, leaping across a gap between two trampolines and launching themselves up a 26-foot tall aluminum wall. The male trampolinists seemed to travel the furthest vertically; one even jumped onto the wall’s top and landed balanced in a handstand. 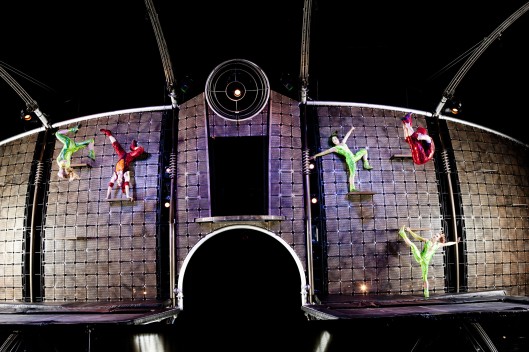 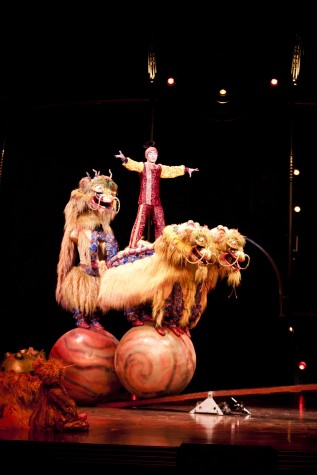 The Dralions also displayed incredible balance. The show’s namesake, these mythical creatures were portrayed by two performers each – one for the front legs and one for the hind legs. Dralions balanced atop large wooden balls like elephants at the circus, sometimes two occupying a single ball simultaneously. At times the Dralions chose to “rest,” but even during these moments, the characters’ simple head bobs were enough to inspire smiles in the audience.

“Dralion”’s diverse performance lineup also showcased aerial hoop, juggling, skipping ropes and Diabolo (Chinese yo-yo), and of course, Cirque’s characteristic over-the-top clowning. I won’t give away any secrets about the clowns, but I will say that I have never laughed so much during a live performance. And for that alone, “Dralion” is worth viewing.