I’ll be posting about these three performances over the next week or so, highlighting one performance or piece at a time. The posts may be a bit out-of-order chronologically, so bear with me! I am starting today with Diavolo Dance Theater’s work Fearful Symmetries, as performed at the company’s February 8th performance. Soon to follow will be a post about Diavolo’s Trajectoire.

In Diavolo Dance Theater’s Fearful Symmetries, ten company members used Tetris piece-like structures to continually reshape their onstage performance space. In doing so, the dancers challenged themselves to redefine the ways in which they interacted with gravity. Dressed in industrial work garb, these performers crawled in, out, around, under and on top of the cubic pieces, always with a strong sense of theatricality.

The music in this work began as industrial sounds; machines scraped and oscillated, periodically emitting a hisses of steam. Horns, woodwinds and percussion instruments were introduced as the dancers’ choreography became more active, and it appeared that each note had a correspondingly punctuated movement*.

*The audience later learned from Diavolo Educational Director Chisa Yamaguchi that Fearful Symmetries was the second part of a three-part installment commissioned by the Los Angeles Philharmonic Association. The music by John Adams, she said, came before the choreography in this work, which was a creative shift for the company. This explains the dancers’ heightened sense of musicality throughout the piece. 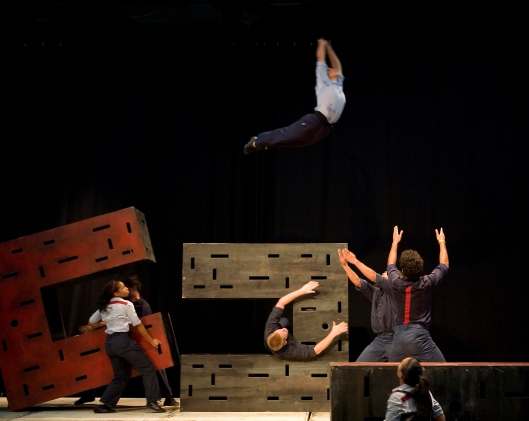 A dancer dives off of a dissembled box in Diavolo’s “Fearful Symmetries.” No copyright infringement intended.

As partially illustrated above, dancers performed headstands and balances on top of the blocky shapes, and flipped off of them just seconds later. Fearful Symmetries’ choreography also utilized the shapes’ ability to obstruct audience perspective; dancers created unique images by highlighting only specific limbs while their torsos were concealed behind the blocks.

As the work progressed, animalistic male choreography amped up testosterone levels onstage; at one point men pounded aggressively on fragments of the block (which were, at that time, arranged to look like desks) and executed wave-like arm gestures in a ripple pattern.  After pursuing a single woman with wolf whistles, the men each found their own female counterpart. Makeout moments between couples ensued here, but these romantic connections didn’t feel particularly genuine. It was here that I found myself asking – What is this work really about?

The program notes suggested that in Fearful Symmetries, the cube evoked the beginning of time, and that it held the answers to questions like, “Where do I come from?” and “Where am I going?” While the cube was most certainly an abstract figure in the choreography, I can’t say that my perception of it was quite so lofty.

I preferred to think of the dancers’ interactions with the block as a theatrical comment about problem-solving. At first glance, a problem can seem very large and may be daunting to approach, much like the cube at the start of Fearful Symmetries. But with the help and support of one’s community, that same problem can be reshaped and managed in a multitude of ways – just like the cube.

Fearful Symmetries ended with the image of a woman seated on the shoulders of her cohorts, peering through a telescope at an overhead light. The idea of this dancer, who was quite literally looking forward toward a positive future, satisfied both the artistic director’s interpretation of the work, and my own.

Which interpretation  makes more sense to you? Leave me a comment and let me know!